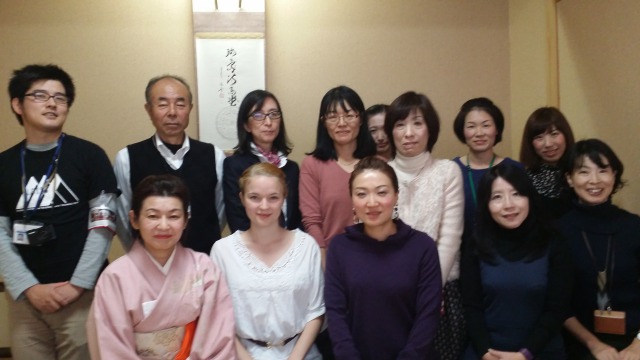 A reservation and a small fee (~JPY500) were necessary to participate in the event. Registration can be done through e-mail, by responding to the public invitation. Participants have a choice of thin tea (薄茶, usucha) or thick tea (濃茶, koicha). A reservation ticket will be provided, indicating your preference. I chose to attend the ceremony with the thick tea.

On the day, about eight participants were welcomed into a Japanese-style room by two staff members. While one member was preparing tea, another member was providing and explanation about the traditional Japanese tea ceremony.

Printed instructions and illustrations were provided on proper tea etiquette. The staff also provided clear explanation and demonstration, allowing any first-timers to enjoy the event without much fuss.

The procedure for drinking thick tea differs from the usual thin tea. One large tea bowl is prepared for multiple people.  If there are three participants, an amount for three people will be prepared in the same bowl. If there are five participants, the tea for five people will be prepared. The tea is drunk little by little in the large tea bowl. After drinking, the lip of the bowl is gently wiped clean, then passed on to the next person. As I sat at the very end, I drank the thick tea last. The thick tea was bitter for me.

In the end, I took pictures with everyone who joined the ceremony. It was fun to listen to stories about tea, while drinking the tea itself.