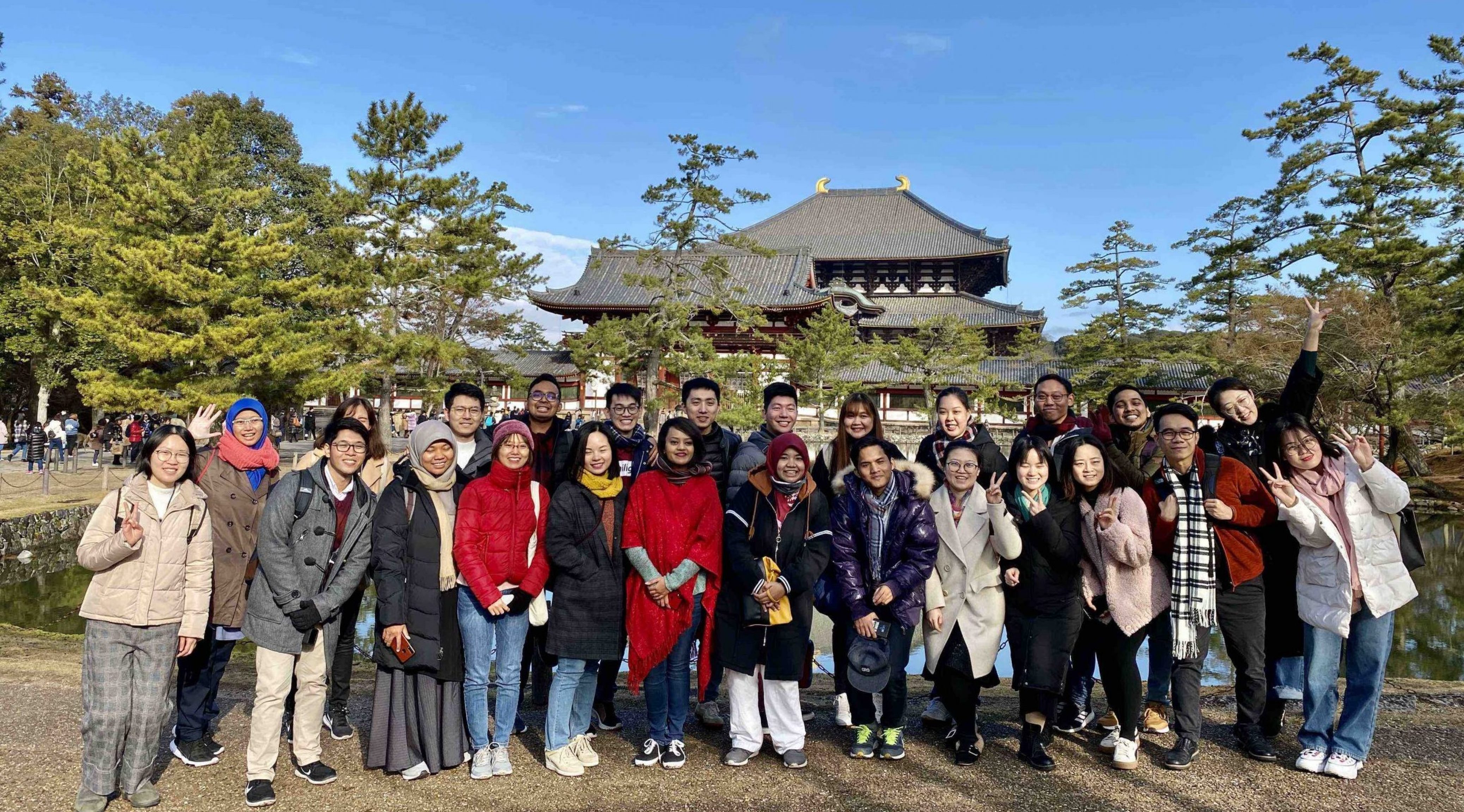 NAIST Biology Pre-screening Internship 2020 participants enjoyed an awesome fun-packed weekend last January 18-19 around places here in Kansai. This excursion was organized by 8 volunteers from the current international students of the Division of Biological Science.

The purpose of this excursion was to introduce some of the main attractions in Nara, Ōsaka, and Kyoto, with hopes to strengthen the bond of friendship among the 26 internship participants that came from different countries (which includes Malaysia, Thailand, Vietnam, Indonesia, Bangladesh, the Philippines, and China).

On Saturday, the participants visited Nara Park to immerse themselves with the ancient history and culture of Japan. While approaching the park early in the morning, the crowd of cute deer roaming around Nara Park greeted participants . The interns enjoyed feeding the deer with shika senbei or “deer crackers”, even though some of them were attacked by hangry (but adorable!) deer. The journey continues by visiting the Tōdaiji, where the Great Buddha Hall (daibutsuden) is located. The participants able to see the Daibutsu, one of the most gigantic bronze Buddha statues in the world, that has been residing there for more than a century. After that, participants were headed to Nakatanidou, a mochi (Japanese sticky rice cake) making shop for their last stop for the Nara leg of the trip. They were very impressed with the mochitsuki (mochi making) skills. Besides, they had the chance to taste the yomogi mochi (a type of mochi that green in colour). All the participants took their lunch at the restaurants near Kintetsu Nara station before leaving for Osaka in the afternoon.

The journey took around an hour of train to reach Ōsakajōkōen Station, Ōsaka from Kintetsu Nara Station, Nara. The first destination in Ōsaka was the city’s notable landmark, Ōsaka castle. Street performances, a baseball tournament, and traditional dance practice by students line up the way to Ōsaka Castle, all of which entertained the participants. Chilly weather accompanied the magnificent beauty of the Osaka Castle Park and its surroundings. After taking group photos, the participants headed straight to the Namba district, another top tourist destination in Ōsaka. Participants strolled along Dotombori, where there lots of LED signboards illuminated the streets and the Dotonbori canal. After having dinner, the participants went to Shinsaibashi shopping street to shop for omiyage (souvenirs) to be brought back to their home countries.

Then, on Sunday, the trip to Kyoto started by visiting the Fushimi Inari Shrine in the morning.  Before entering the shrine, the volunteers explained the history behind the sanctuary and demonstrated the proper “cleansing ritual” or temizuya as a respect to the local custom. They were overwhelmed with the magnificent stacks of multiple torii gates along the hiking trail to Mount Inari, worthy of the term Instagrammable. However, taking photos was not easy as pilgrims were flocking their way to the mountain. Afterwards, they had a chance to wander around the nearby shopping street for more omiyage and light snacks such as grilled mochi, takoyaki, beef skewers, and other traditional Japanese street foods. There was also matcha ice cream, which helps to cleanse their palate after taking all those grilled goodness. The excursion then stopped by Kyoto station for a lunch break and some shopping before riding the bus 206 to Kiyomizu-michi and visit Kiyomizudera, one of the UNESCO World’s heritage sites. However, as they reached there, the main hall of the temple cannot be seen as it still undergoing renovations. But, they were still fascinated by the temple scenery overlooking the breathtaking view of Kyoto city. Later during the day, all the participants had yakitori near Gion district for dinner before returning to their respective accommodations.

The NAIST Biology Pre-screening Internship for 2020 happened on January 14-23. It is an annual 10-day event organized by the Division of Biological Science, NAIST, since 2014. This internship program is a partnership between NAIST and various universities and research institutes in countries across the Asia Pacific region. It allows participants to further their doctorate study at the Graduate School of Science and Technology, NAIST. This program is one of many initiatives towards the realization of the goal to make NAIST as a top campus global in Japan by the year 2023.

As a brief summary, this internship consists of a lab tour in three or four laboratories and interview sessions by the professors of the assigned laboratories. The candidates were also asked to present their master course research in front of the faculty members. This same faculty group evaluated their performance during the laboratory rotations, the interviews, and the presentations during this internship.

The weekend excursion provides a platform for all the participants from different nationalities to get to know each other while enjoying the spectacular attractions in the Kansai region. We hope this excursion also exposed them to some of traditions, customs, culture, and history of Japan.